The Holy New Martyr Theodore the Byzantine, Protector of Mytilene St. Theodore was born in the year 1774 in the city of Neochorion of Byzantium. He had good Christian parents, who were careful in the Christian upbringing of their children, demonstrated by the fact that a brother of St. Theodore, Gregory, later became bishop Adrianoupolis.From a young age Theodoros wanted to become a painter, and he became a student of a renowned painter who worked in the palace of the sultan in Constantinople. But there he faced unknown pressures, and his spiritual strength at his age was tried, and he ended up converting to Islam. After a few years passed, however, he realized the heavy sin which he fell to. At that time there was a serious epidemic in the city of Constantiniple, and this made him consider death, God, the soul, the other life. Thus the lost sheep sought the road to return. He escaped from the palace with foreign clothing and so they wouldn’t recognize him, he wore a jug on his shoulder. 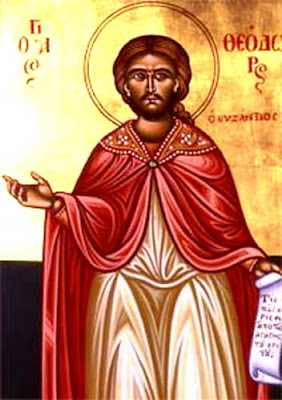 Icon of St. Theodore the Byzantine

He left from the palace and went to sea, where by the will of God, he found a boat heading to the island of Chios, which became for him a place of spiritual regeneration and preparation , of great repentance and his decision to give his life to Christ, whom he unwittingly denied in his childhood.There in Chios, in the monastery of St. Makarios, he read many books and saw the love that the saints had for Christ, so much so that they gave their lives for their Savior. «I who denied Him, said Saint Theodore, should die a thousand times to wash away my sin with my blood». And he made his decision.

[The St. Makarios mentioned is St. Makarios (Notaras) of Corinth(1731-1805; his feast is celebrated on April 17th) (logismoitouaaron.blogspot.com), a recent church father and a great hierarch and ascetic. 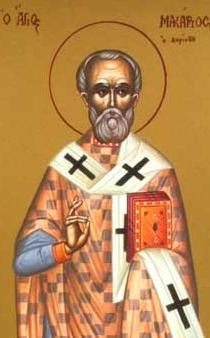 He and St. Nikodemos of the Holy Mountain helped compile the Philokalia, and he was one of the “Kollyvades” movement of Mount Athos to educate the faithful and preserve correct Orthodox teachings. The following is a quote from Dr. Cavarnos on the role St. Makarios played for numerous Neomartyrs of the Church:

“The importance of one having such a spiritual Father was clearly acknowledged by the New Martyrs during the years of the Turkish yoke. This we learn from their lives, and from the lives of the Holy Fathers to whom they fled for comfort prior to their martyrdom, as a fitting preparation. In the life of St. Makarios, Bishop of Corinth, which was written by Athanasios of Paros, we read that many laymen went to him for confession and advice, there being among them many who afterwards courageously went to martyrdom for their Christian faith. Athanasios gives the names of three of them: Polydoros the Cyprian, Theodore the Byzantian, and Demetrios the Peloponnesian. Before going to their martyrdoms, they spent a period of time at the hermitage of St. Makarios on the island of Chios. He, as a wise and experienced trainer of martyrs, as Athanasios calls him, prepared them well for the test of martyrdom—by confession, fasting, prayer, and encouragement. Thusly prepared, they went to martyrdom with exceeding courage and great gratitude to St. Makarios for the good which he had done: that is, in preparing them to receive the crown of martyrdom.” (here, for more information on St. Polydoros the Neomartyr, see: here, and for St. Demetrios of Peloponnesos, see: here]

He followed the spiritual ascesis outlined by St. Makarios, praying with deep compunction to Christ, Panagia, the Holy Martyrs, and especially St. Polydoros, who had recently also given his life for Christ and also was a spiritual child of St. Makarios. St. Theodore also repeated prayers written for him by a fellow monk of his, including the following prayer:

“Lord Jesus Christ, the physician of my miserable soul, do not turn from me the sinner in disgust, but strengthen my weak and hardened heart, and warm it in its love for Your martyrdom. I denied You, my Maker and Benefactor, without being forced by anyone and became a servant of the vile devil and a plaything of demons, and found myself under their authority and subject to their will. Now aided by Your grace and unsurpassable forbearance, which has helped me to flee their traps, help me, who am a miserable and pitiful creature, unworthy of the Orthodox Christian calling, to confess You before rulers and tyrants. Yes, my Lord, yes only-begotten Son of God. Do not turn in disgust from your servant, but accept me in the choir of your martyrs, and find me worthy to gain their forgiveness. Amen.”(translated by Nomikos Michael Vaporis in his book: Witnesses for Christ)

He decided to present himself to the Turks and tell them that he had repented, that he who became a Muslim is now a Christian and he had decided to die for his faith. He decided not to appear before the Turkish authorities of Chios so that he would not incriminate all those located in the monastery of St. Makarios. So he went to the nearby island of Mytilene. With him came a monk from the monastery of St. Makarios, who remained in Mytilene until St. Theodore was martyred, and he recorded the events of his martyrdom. 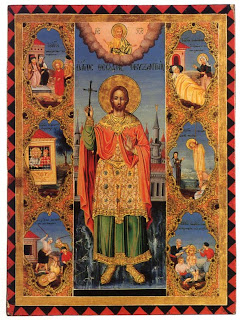 A Vatopaidi Icon of St Theodore With Scenes of His Life

Saint Theodore appeared before the Turkish authorities on the Thursday of the First Week of Great Lent, and he related to them that he had a faith that was gold, and the Turks took it and gave him a faith of copper. And now he would give it back that he may take back his first faith. «I am a Christian, he said, and I will die as a Christian».

At first they thought he was mad.

Soon, however, they understood that he was speaking seriously, and was determined to face death, to keep the faith. They tried to persuade him to return by promises and threats. They imprisoned him. They allowed wild Turks to come night and day to the prison to torture him, as much and as terrible as they could. But he remained unshaken. He prayed and kept his faith. And God gave him courage and strength.

At that time there was a certain youth from Thessaloniki named George, who somewhat doubted what he read about the Great Martyrs of Christianity, that they were able to withstand such fearsome tortures (such as his patron Saint, St. George the Great-martyr). Yet, he heard that St. Theodore had recently been imprisoned for his faith, and so he sought an excuse to be temporarily put into prison to witness a true Orthodox Martyr in person. This George had his faith greatly strengthened by St. Theodore, and the former also offered him words of consolation and encouragement.

When the Turkish authorities saw that they would not be able to change the mind of the Saint, they decided to execute him by hanging. Local Christians brought him Holy Communion at his request, and he was taken out of the prison on the Saturday of the First Week of Great Lent, while he chanted “Ti Ypermacho…” (“O Champion General…”, the Kontakion from the Akathist of the Theotokos). He was hung outside of the fort of Mytilene, somewhere near where today is the 5th Primary School. On the 17th of February of the year 1795 St. Theodore delivered his soul to God, who gave his life by a horrific death as a martyr.The Holy Relic of the Saint remained hanging for three days by the order of the Turks. Then with the permission of the Turkish authorities fifty of the foremost faithful of Mytilene received the Saint’s body and buried it in the courtyard of Panagia Chrysomallousis. After three years, when they disinterred the Remains of the Saint, they saw with surprise and admiration that the body had been preserved intact by the Grace of God. They received it with much devotion, and buried it in the Crypt of the Metropolis Cathedral of St. Athanasios in Mytilene, where it remained until 1832. (See a subsequent post for the account of the uncovering of St. Theodore’s relics, and his miraculous deliverance of Mytilene from the plague: here) Currently the Holy Relics of St. Theodore the Byzantine are in the Nave of the Metropolis Church of St. Athanasios in Mytilene, where they are venerated by the faithful. The Saint is considered the Patron Saint of the people of Mytilene, foremost because of his deliverance of the people from a great plague (celebrated separately on the Sunday of the Paralytic, after Pascha), and for the many miracles he continues to work for those who seek his help with faith in Christ. One final note, a list of Orthodox Patron Saints online mentions that St. Theodore the Byzantine is also a great help in carnal warfare and for chastity. 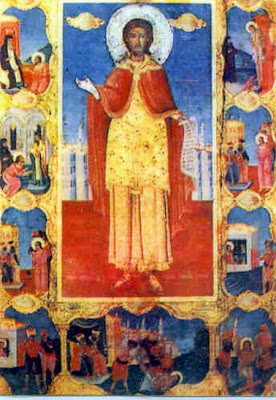 Icon of the New Martyr St. Theodore the Byzantine, With Scenes From His Life

(This was translated and excerpted from pigizois.net, O Agios Theodoros o Byzantinos: Poliouchos Mytilinis by Sotiriou, and Witnesses for Christ: Orthodox Christian Neomartyrs of the Ottoman Period 1437-1860 (Witnesses For Christ), the latter of which is an excellent compilation of the lives of so many Orthodox Neomartyrs from many different countries and centuries, all translated into English. It is very highly recommended.)

Thou wast offered to God as a precious gift through thy labours in conflict, and didst become a blameless and acceptable offering. O blessed Theodore we praise thy struggles; we give glory to God who has strengthened thee, O much-afflicted one, against all thine enemies, visible and invisible.

Thy contest has arisen like a bright morning star and has inspired us to glorify Christ. He has shown thee forth as one steadfast in struggle, O Martyr Theodore.

Let us the faithful praise the pearl of Jesus in odes and hymns, Christ’s bright star of the neomartyrs, Theodore the new, the boast of the faithful.

(the full service of St. Theodore the Byzantine the New Martyr (in Greek) was written by Sts. Nikodemos of the Holy Mountain and Nikephoros of Chios, and is available here)

Source: Full of Grace and Truth